Journeys Behind The Images

Journeys Behind the Images

The journey to Norway was as much about going home as it was about photojournalism. The first impression I had was its purple snow dappled fingers of fjordland reaching out into the ocean and a wave of knowingness and comfort. Peering behind me I could see white pebble stepping-stone clouds scattered across the blue expanse looking like crests of waves, obscuring the boundary between sea and sky. Excitement swelled to the degree that this anxiety-riddled human creature didn’t even notice the turbulence as we sank lower into this unknown but somehow familiar land.

Have you ever arrived somewhere you have never been before, it could be a coffee shop, an exotic island or an undiscovered calm oasis in your local park, and felt at home, like you belong there, so much so that for a brief moment the reason why your there just melts? That’s what happened to me. The feeling lasted through the creepily quiet immigration booths, through the brief discussion with the train ticket man, through the six hour magical train journey weaving amongst the icy pine threaded hills and frozen skaters lakes and wasn’t even stopped upon arrival in the tiny town of Oppdal at night, in the dark. Its features were muted by fresh snowfall. An iron-clad, foot-thick London-forged chest had been sprung releasing my spirit higher than a hippie in the Himalayas. 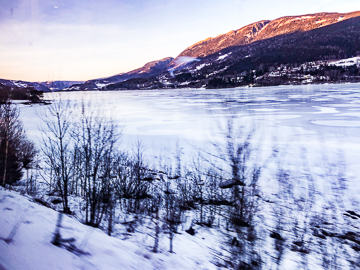 That feeling has come over me before, although perhaps not as strongly or as permanently. I felt it as I bounced on the insufficiently upholstered seat of the converted jeep, crisp pre-dawn air sweeping its fingers through my scraggly curls, and the sun blushed beneath the Serengeti savannah horizon. There is a subtle one-ness in the small hours of the morning when the urgent business of life is dormant and we get to just exist and absorb. 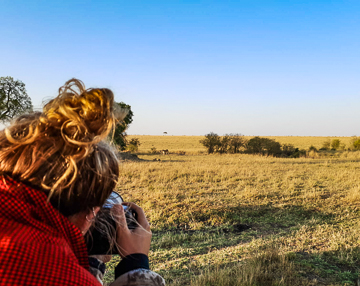 I am late. The cubs rise at dawn, and as the first golden strip of light winks into existence I feel the vehicle lurch forwards, devouring the dusty trail beneath it. With serenity still in my heart, urgency took up residence in my mind as we speed towards our target. But when we arrive they aren’t visible. It is just possible to make out the sandy swatting ear of one of the lionesses but it isn’t the shot I hoped for. Imagining the two month old cubs rolling and pouncing Nala and Simba style in the shade of tall dry grass had my fingers twitching, but without disturbing the pride we can’t get any closer. It is crucial to avoid disturbing the natural behaviour of the animals or threatening them in any way and those are an absolute hard line rule for the rangers, the national park management and my own ethics. I would not break that rule for the best shot in the history of photography. We let sleeping lions lie and move on. 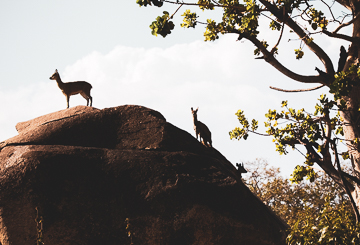 Later that evening our ranger takes us to the usual haunt of the region’s male leopard. The landscape is labyrinthine. Barely visible tyre tracks wind smoothly around outlandishly giant and mysteriously rounded boulders 30 feet tall. Dik-Dik’s, the world’s smallest species of antelope, stand sentinel on top of them silhouetted in front of the sinking sun. They curiously peer down at us as we surreptitiously slink between the sleeping stone giants. I scan the trees looking for junctions of thick branches that poke out at the right angle, the flick of a draped tail or spots and dots incongruous to shade-striped bushes. I really don’t know what I am looking for having never seen elusive leopards in the wild, but boy was I finding many pseudo ones!

“When the sun sets, when the leopard comes alive”

Finally, just as we are about to return to camp for curfew we catch news of a sighting on the ranger radio. Tearing around boulders and whipping through the underbrush we pull to a dusty halt in front of a magnificent tree. There, amongst the dappled shade and only barely visible to the naked eye, is our sleeping leopard. He pokes his head up and yawns once, twice and then begins licking his paws – a sure sign that he is waking up for the evening hunt the ranger explains. 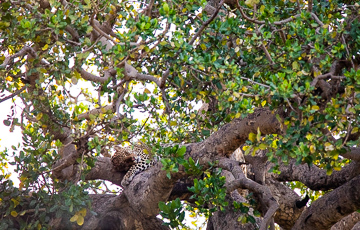 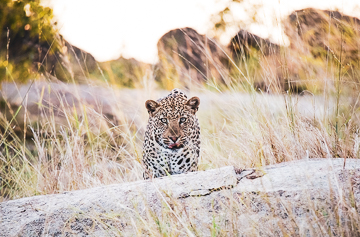 When the sun sets, the leopard comes alive. Leopards are nocturnal, hunting at night when their keen eyesight and extreme stealth are most advantageous. Sure enough, he rises and elegantly lopes head-first down the trunk of his tree and disappears into tall grass. He emerges suddenly, walking directly towards our vehicle over the curved stone, climbing the slope until he reaches the highest point; a perfect vantage point from where to begin his prey surveillance.

When untouched snow covers mountains, all sounds pause and cotton wool silence swaddles you. Whispers of habitual life – rushing cars and sirens, jet engines and underground rhythmic rumbling, the kettle bubbling in the background the tick-tick of tapping keyboard clattering – roar through the distance of memory filling the void. But then, after a while, they recieve the attention they are craving and can return to where they surfaced from. The feeling is simultaneously calming and unsettling. In this space is where creativity can bloom and that’s when I get a chance to capture the shots that make the greatest impact. 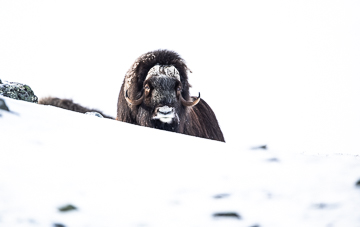 Up on the ridge above the treeline where white sky and snow melt into one I come across a sleeping musk ox nestled in the wind- sheltered embrace of a rock wall. I crouch silently behind a boulder, lens perching on top of it and watch as he blinks long lashes open and shakes his shaggy head. Rising, he takes a few steps in my direction into the slam of wild wind which cinematically whips his fur into a flurry. In that moment he looks up directly into my lens and his stoic determination seems to beam directly into my soul. I knew as I pressed the shutter button that image would be a powerful one.

The life of a photographer, I’m learning, is unpredictable and unstable. Sometimes it seems impossible to let the creativity drown out habitual life, and even when it is possible there are endless variables that really hardly ever line up, lighting conditions, animal behaviour, visibility, equipment. When they do it’s golden and it matters.